Whitsundays gears up for the wedding of the year

A surprise for the two mothers giving their boys away and a ceremony filled with emotion are just sprinklings of what guests at the Whitsundays’ wedding of the year can expect this week.

On Friday, August 3, Newcastle couple Joshua Breakwell and Joshua Starr – winners of the Whitsundays’ $50K wedding giveaway celebrating marriage equality – will finally say ‘I Do’ on the grounds of Paradise Cove Resort.

The wedding, incorporating around 60 guests including wedding media, reality television stars and family and friends, has taken eight months and the efforts of 16 Whitsunday wedding suppliers to pull off.

From the guest and groom transfers with Red Cat Adventures and Air Whitsunday, to the newest addition of a honeymoon bareboat charter with Sunsail Whitsundays, every detail has been carefully planned and every service given free of charge by an industry determined to offer destination weddings for all.

Paradise Cove co-owner Julie Telford, who originally came up with the concept of a competition celebrating Australia’s acceptance of same sex marriage, said it had propelled the Whitsundays into the national spotlight and been an incredible journey for all involved.

“Who would have thought we’d have got to this point – but we couldn’t have done it without all the suppliers putting in an overwhelming amount of work to make sure this is literally a dream wedding, and without the Josh’s who have been the ideal couple to win this competition,” she said.

Jess Lawrence from the Wedding Planners Whitsundays and peak industry group Weddings Whitsundays, said while this wasn’t the region’s first wedding giveaway it was certainly the biggest and the largest celebration of same sex marriage to date.

“It’s become more than any of us ever hoped for in terms of possibilities for the future, showcasing the diversity of what we can offer and showcasing how well the wedding community works together – it wouldn’t be possible if we weren’t all collaborating,” she said.

“And for the Josh’s it means the world – from winning the competition to having the wedding of their dreams – seeing it come to fruition is going to be very emotional this week.”

The Joshua’s, who prior to Australia’s legislative changes would have travelled to New Zealand to tie the knot, said the biggest thing for them was finally being able to marry in the company of family and friends.

“Having all the people who are really close to you in the one spot on a day that’s all about you and your partner is very special,” Joshua Breakwell said.

“Forming relationships with people in the Whitsundays has also been pretty cool – we’ve had a great time hanging out with everyone,” Joshua Starr added.

Ms Wheeler said Tourism Whitsundays would be bringing along representatives from the publications Your Queensland Wedding, Queensland Brides, The Bride’s Tree, Polka Dot Bride, Wed Shed, and Dancing With Her in a first for a Whitsunday wedding industry ‘famil’.

“We do a wedding famil every year but this one is so special because we’re actually showcasing a real wedding and a wedding that is so exciting and with so much hype,” she said.

“It’s also showcasing that a wedding in the Whitsundays can be anything you want it to be – a holiday, a reconnection for your family and friends – it’s a whole package.

“And watching what Weddings Whitsundays and The Wedding Planners Whitsundays have been able to do with this in terms of promoting the destination has been absolutely priceless – it’s a good news story along with Daydream and Hayman islands opening back up, and a celebration of where we’re at.”

Joining in that celebration from the list of invited celebrities are Carly Saunders and Tresne Middleton, a.k.a. the ‘positive pair’, who went public with their own relationship during the 2014 series of Channel Seven’s MKR.

Now dedicated to promoting positivity through their business ‘The Happiness Mission’, Carly and Tresne were married overseas after an initial ‘commitment ceremony’ in Australia.

“It was kind of hard because it was just us, our family weren’t there to share it – so we definitely want to get married again – third time lucky,” Tresne said.

As for Friday’s ceremony, celebrant Annie Lloyd-Lewis said it would be “fairly traditional, but very romantic and very sincere”.

“There may even be a few tissues fluttering in the breeze,” she said.

To keep up to date with all the news from the big day, follow The Wedding Planners Whitsundays and Paradise Cove Whitsundays on Facebook and Instagram. 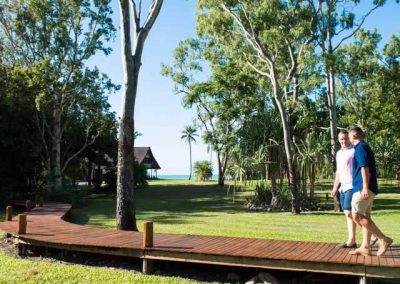 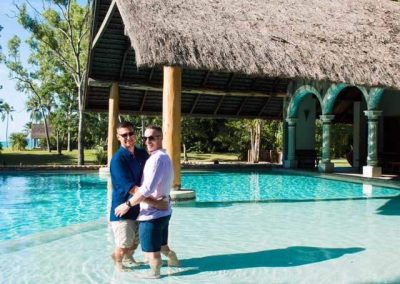 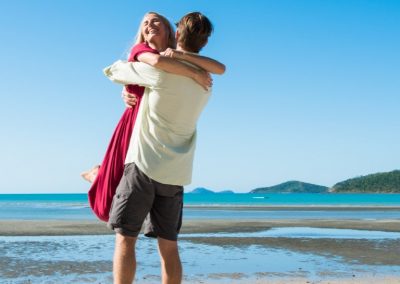 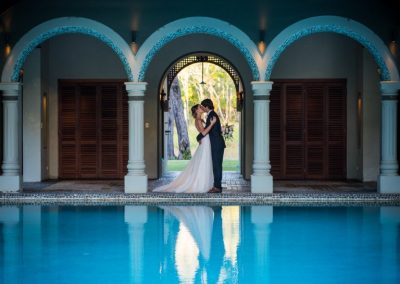 Talk directly with our team